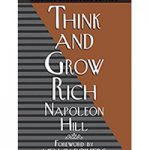 Napoleon Hill was one of the earliest producers of the modern genre of personal-success literature. His most famous work, Think and Grow Rich, is one of the best-selling books of all time having sold over thirty million copies.

Think and Grow Rich by Napoleon Hill
The Top Selling Success Book of all-time!! Cited by many present day success teachers as the book that got them started. A must read!!

In 1908, Hill was to interview industrialist Andrew Carnegie, who at the time was one of the richest men in the world. Hill discovered that Carnegie believed that the process of success could be elaborated in a simple formula that could be duplicated by the average person. Impressed with Hill, Carnegie commissioned him (without pay and only offering to provide him with letters of reference) to interview over 500 successful men and women, many of them millionaires, in order to discover and publish this formula for success.

Hill is also credited with coining the phrase ‘Master Mind’ (more commonly, Mastermind). The ‘Master Mind’ may be defined as: “coordination of knowledge and effort in a spirit of harmony, between two or more people, for the attainment of a definite purpose.” In Think and Grow Rich, Hill discusses his creation of Master Mind groups and how these groups could multiply an individual’s brain power and continually motivate positive emotions.