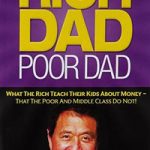 What the Rich Teach Their Kids About Money That the Poor & Middle Class Do Not!

Anyone stuck in the rat-race of living paycheck to paycheck, enslaved by the house mortgage and bills, will appreciate this breath of fresh air. Learn about the methods that have created more than a few millionaires. This is the first abridged miniature edition of Rich Dad, Poor Dad (Miniature Edition).

The full-length edition has sold millions as a New York Times bestseller. As proven by the runaway success of The Secret and like titles, changing one’s thinking to influence one’s fortune sells big, and forms the basis of rich dad’s advice. Learn to think like a rich dad and let your money work for you!

Although Kiyosaki can take a frustratingly long time to make his points, his book nonetheless compellingly advocates for the type of “financial literacy” that’s never taught in schools.

Based on the principle that income-generating assets always provide healthier bottom-line results than even the best of traditional jobs, it explains how those assets might be acquired so that the jobs can eventually be shed.

Rich Dad Poor Dad is the longest-running bestseller on all four of the lists that report to Publisher’s Weekly magazine: The New York Times, The Wall Street Journal, USA Today, and BusinessWeek. It has held a top spot on The New York Times list bestseller list for nearly five years and was USA Today’s #1 money book for 2004.

Translated into 44 languages and available in 80 countries, the “Rich Dad” series has sold over 20 million copies worldwide. In 2005, Robert was inducted into the Amazon.com Hall of Fame as one of the bookseller’s Top 25 Authors.