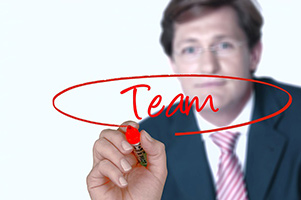 A team is not a team without a leader. Similarly, a leader is not a leader without a team; everyone involved is important. Everyone in the group has certain skills, some more than others, that help lead the team forward. A team’s job is to complete certain goals set before them and these goals typically come from the leader. They look to the leader for instruction, for guidance, and for discipline.

A leader should see every group member as an integral part of that cohesive group. They should have the respect of their respective team and they should be able to focus the team’s energy towards the completion of specific goals. This is called effective leadership and it’s an important part of staying ahead of the competition in this ever increasingly competitive world.

Effective leadership starts with the way the leader perceives the group. Is the group seen as one unit or is each person in that unit seen? Everyone is important and everyone should be utilized in order to complete certain goals. A good leader is able to make everyone feel important; when everyone within that group feels as though they are a necessary component of that group, they will do their best to do whatever they have to do. After all, they are important; if they fail, the team fails.

In our choice in the 2016 Presidential election, I believe Donald Trump wins hands down compared to Hillary Clinton when it comes to leadership. Hillary seems to follow President Obama’s “lead from behind” approach of reacting to world events rather than directing them. Trump, on the other hand, has a long history of effective leadership building many businesses and the “Trump” brand. Some like to point out his business failures, as if that somehow diminishes his success. But, anyone familiar with success understands there are also some failures along the path. That’s just the nature of success. 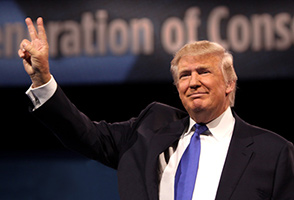 Donald Trump exhibits an unconventional leadership style. Donald Trump started early to develop his personal brand, this is exhibited by every piece of real estate Mr. Trump owns. Every casino, building or golf course has his name on it. He is eccentric, powerful, but yet he makes very smart business decisions. He is also a risk taker. All these business skills have made him a very well recognized business leader, and one of the nations most known billionaires. Donald Trump has appeared in many magazines, has written a couple of books, and even gotten his own show on NBC called “The Apprentice”. But what makes Donald Trump successful in almost every endeavor he takes on? Was he born a leader? or did he just become a great leader. There are certain characteristics common in all leaders. Some of those are values, skills and cognitive abilities. Mr. Trump exhibits all of these traits. If this is what has made him as successful as he is, why are certain leaders not able to achieve his type of success? Perhaps he has something extra that has propelled him above everybody else. Everything that he touches seems to turn to gold. Donald Trump’s leadership styles have made him rich, powerful, famous and known through out the world. [“The Leadership Style of Donald Trump.” 123HelpMe.com.]

Effective leadership can be taught. Colleges usually offer courses in management as part of their curriculum. These management courses are a great start towards effective leadership. They prepare you with lessons required to tackle certain problems should certain situations occur.

Effective leadership courses should prepare a manager for certain problems that could arise either within the group or with the group as a whole. For example, what if two team members don’t like each other? A good leader will be able to help the team members see past their personal problems in order to focus their energy towards helping the team. After all, they are an important part of the goal and the team can’t do it without them.